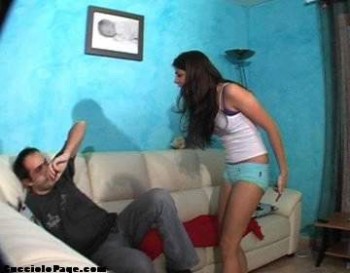 To be in shape, Cucciolo decides to contact a gym to pay the service of a personal trainer at home. When the personal trainer knocks at his door, he’s delighted to discover that it’s not a man but a sexy and gorgeous girl. But despite her lovely look, she imposes a very hard workout to Cucciolo which seems more interested to watch at her curves rather than to sweat ! And while she bends forward to show a new exercise, he can’t resist to spank her bottom ! The girl reacts vehemently and in a few seconds, she knocks him down. He is screwed up ! From now on, his personal workout will become pure hell ! She slaps his face, she jumps furiously on his sternum, she crushes his testicles, she squeezes his throat, she stands and sits on his face, she spears his stomach and genitals with the help of a bed of nails. And again, she kicks his ribs and balls brutally, she forces him to stand up and to hold her full bodyweight while she stands on his legs and she sits on his neck, she bangs his head against the wall. And more, she forces him to lick and to swallow her sweaty feet, she stands on his balls and she orders him to lift her up, she rides him like a human pony and she asks him to bring her to the bathroom because she wants to take a shower. 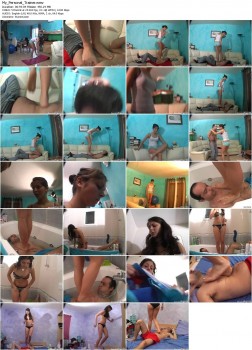 ClubStiletto - What's your day been like? - Lady Bellatrix - Scissor
Lady Bellatrix walks into the bedroom to find her slave right where she left him, with a boot wedged in ...

Ballbusting and Foot Lovin - Ball Training Workout - Ball Abuse
Bryan is working out, trying to get in shape when the Bitch Ball Trainer shows up to really get him ...